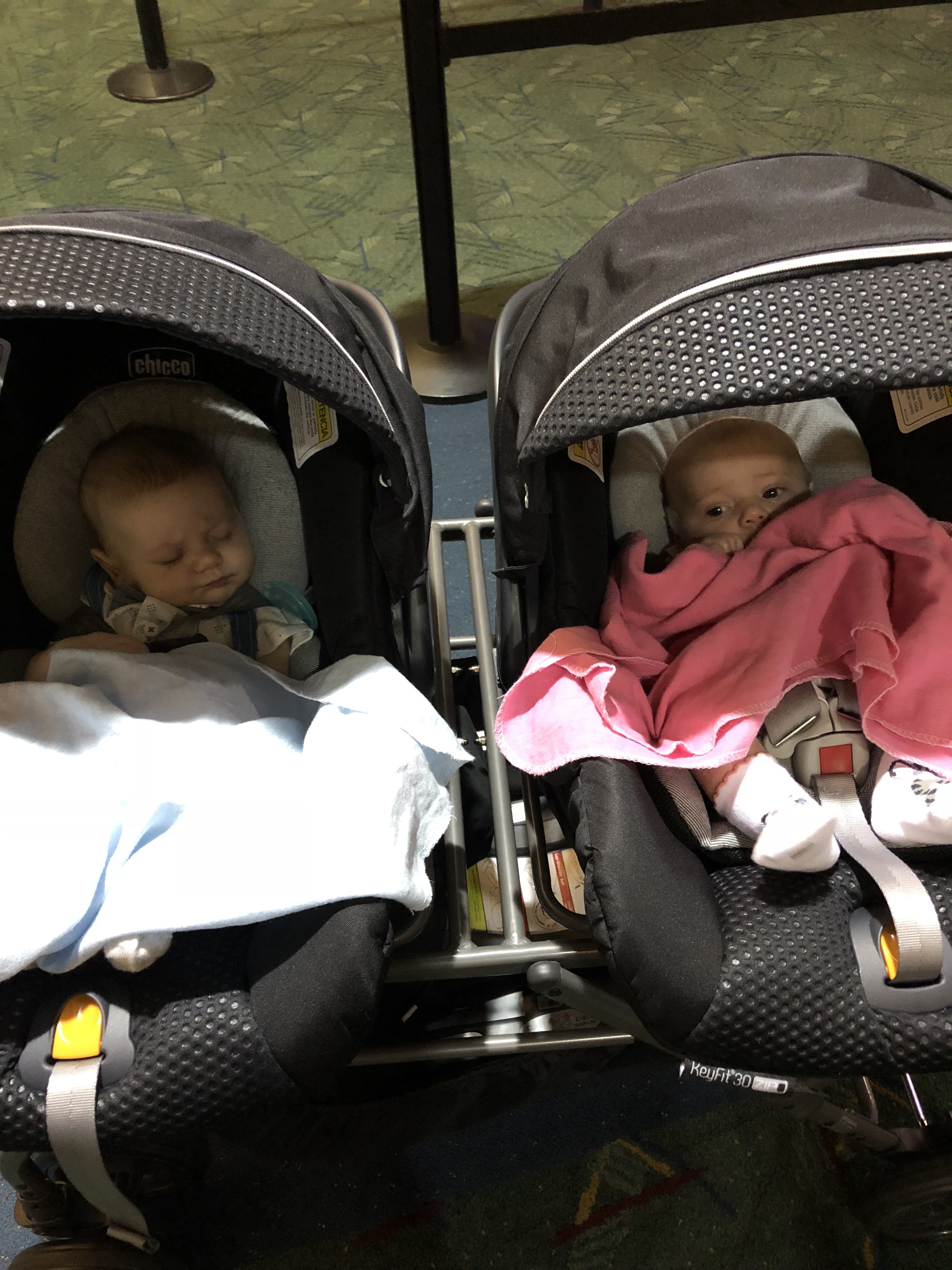 Sara and I had an opportunity travel down to Anaheim to meet with relatives and share our twins.  However, we were so nervous about taking them so far for the first time.  They are not the dedicated sleepers they used to be. We just weren’t sure whether they could handle a plane ride.  We weren’t sure we could handle it, especially with a layover on the way and a connecting flight.  It seems more often that flights leave later than scheduled and they cut connections very close.  Then there was the matter of everything we would need to take with us; And the embarrassment we’d have to endure as captive culprits if Gwendolyn and Lawson drew hostility from other travelers.

Planning a simple three night stay proved to be a kind of complicated mess.  We needed to be sure to prepare for any situation. Which meant expanding on our usual array of binkies, burp cloths, and bottles.  Feed schedules, pump schedules, flight schedules all had to dance around each other and all with two unpredictable infants.  Getting to the airport was a problem like we’ve never experienced.

Sara and I are used to traveling fast and light.  I’m even faster and lighter toting only a backpack.  With Sara the two of us normally have a couple of carry-ons.  we never check anything.  Now, suddenly I have a double stroller and two car seats with adapters so they fit in the stroller and bases that need to be transported from vehicle to vehicle.  We decide what to check and what to carry on board.  We both had more than enough to carry.  On top of which we had no idea how the twins would react to flying for the first time and we were very nervous about how we would impact the other passengers.

Initially, people met us with a lot of support.  people love Gwendolyn and Lawson and are always stopping to look at them and say nice things.  I appreciate that because I see that positivity transfer to my children in the way that they were people watching at the airport.  I was watching the two of them in their stroller at the Bob Hope Airport as their eyes followed many passers by while Sara was in the restroom.  Their interest and attentiveness was surprising,  especially Gwendolyn’s.  It made me excited since part of our trip was to visit Disneyland and I had hoped they would get something out of the experience.

Checking equipment at the gate

I had to dismantle the stroller and car seats at the jet-way while carrying Gwendolyn in an Ergo Baby.  Sara went on ahead with Lawson.  I didn’t see it, but apparently as she sat down another passenger, who had already settled in with his iPad immediately rose, gathered his carry on from the overhead compartment and moved to the back of the plane.  Back at the Jet-way I clicked one of the car seats into the base I kept in the storage basket at the bottom of the stroller.  We checked the other base inside a suitcase.  That was a last minute decision we made after the Lyft driver dropped us off and we realized we had too much to carry all at once.

TSA and the flight

We passed security easier than expected, but it was a lot of work. We did so much taking apart and putting together.  we had to put everything through in parts to be inspected seperately.  I felt like it didn’t take much time at all and we were on our way with relative ease.  I didn’t sense any ire from the other passengers in line.  Once on board I found the people near us were eager to talk to us about our twins.  They were very complimentary and we just hoped that the ensuing travel would not give rise to any outbursts of screaming, or diaper blowouts etc.  On the contrary, they made me a very proud Dad.  They behaved perfectly the whole time.  I couldn’t believe it.

The compliments kept rolling in by people who were impressed by how well the twins were taking to air travel.  Sara and I were so surprised.  We never dreamed it would go so well.  The best was the return flight, though.  They make you unlatch your Ergobaby during take-offs and landings, because the device is not approved by whoever approves things and the airline has determined arms are more reliable in an emergency than a harness (take that rock climbers).  I was making sure Gwendolyn didn’t lose her third Binky and she was so delightful and responsive that I just kept her in my lap as she smiled and giggled and we kept each other entertained for over an hour.  It was so much fun.  I even got a “Good job, Dad.” by the guy behind me after we landed.

I was really happy that we turned out not to be troublemakers and actually got a lot of positive feedback and well wishers.  It’s just more proof of what a wonderful blessing these beautiful babies are.

FLYING ACROSS THE COUNTRY WITH TWINS